NADI – Wednesday, 22 June 2022. What started as a small interaction over a cup of coffee at the iconic Suva Central Complex way back in 2006 has today turned out to be the biggest cancer fundraising event in the country.

As Motibhai Group executive director Bhupendra Patel recalls, it was a mere coincidence that he happened to meet a group of Australian ladies at the Suva Central complex on one fine morning 17-years ago when the idea of replicating ‘Australia’s Biggest Morning Tea’ concept was floated by the ladies to assist cancer patients in Fiji.

“I vividly remember the day I met those wonderful Australian ladies by coincidence and one of them in the group also happened to be from the Australian Embassy,” Mr. Patel said.

“A week later, the group visited our head-office in Nadi and all the executives agreed to go ahead with their proposal and thus the iconic ‘Bushells Fiji’s Biggest Morning Tea’ (BFBMT) was born with very humble beginnings,” Mr. Patel added.

He said with the generous support of the friendly corporate neighbours in the airport vicinity and the greater Nadi business community at large, the first ever morning tea event to raise funds for cancer awareness and advocacy was held at the company car park at the old headquarters which sits adjacent to the Nadi International Airport in Nasoso.

“Now seventeen-years later, this iconic event which we know as the Bushells Fiji’s Biggest Morning Tea has provided patient care and support and helped save the lives of thousands of patients over the years and I believe this is a major achievement not only for the Fiji Cancer Society but for everyone here at Motibhai Group also as a wonderful way to demonstrate our corporate social responsibility,” Mr. Patel said.

Speaking on the sidelines of the BFBMT event at the Motibhai Group head office at the Motibhai Business Park in Legalega, Nadi on Wednesday, June 22, Mr Patel said the initiative would not have been so successful without the overwhelming support of the business community and all stakeholders who have generously contributed towards this noble cause over the years.

While the event has grown in leaps and bounds in the last 17-years, funds raised from the initiative has over the years helped thousands of cancer patients with the aim this year to raise close to $60,000 for the purchase of medical equipment to be used by registered cancer patients around the country.

“Although the number may seem small, the actual costs of hiring medical concentrators and medical oxygen tanks is very expensive.

According to statistics revealed by the Fiji Cancer Society, an estimated 79% of deaths in Fiji are due to Non-Communicable Diseases (NCDs) and premature mortality from NCDs is rising.

Of these NCDs, cancer is the third leading cause of death behind cardiovascular diseases and diabetes.

As per statistics recently revealed by Dr Devina Nand of the Ministry of Health and Medical Services, approximately 9544 cancer cases were registered from 2015 to 2020.

While speaking at a separate morning tea event in Suva earlier this month, Dr Nand revealed that almost one-third of all cancer deaths is a direct result of excessive use of tobacco, alcohol consumption and unhealthy diets.

Looking at these alarming statistics, fundraising events such as the Bushells Fiji’s Biggest Morning Tea which is the longest running and biggest cancer fundraising initiative in the country is playing an important role in spreading cancer awareness and advocacy. 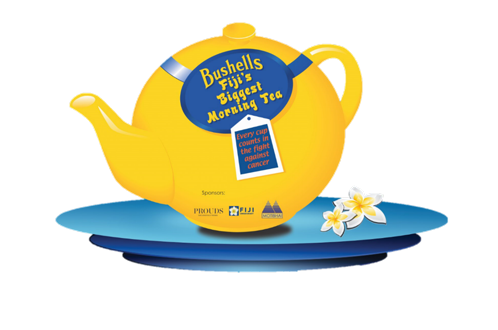